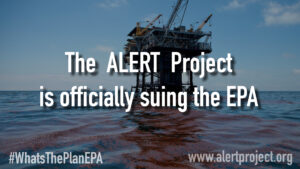 After eight years of preparation and waiting, The ALERT Project has officially sued the U.S. Environmental Protection Agency (EPA) over its outdated National Contingency Plan, the nation’s emergency response plan for oil spills.

The Plan was last updated in 1994 – 26 years ago.  Oil companies are supposed to have viable plans to respond to spills before they can drill or transport oil, and these individual plans are based on the outdated national Plan.

ALERT and founder Dr. Riki Ott have been at the forefront of efforts to bring this lawsuit since the 2010 BP Deepwater Horizon offshore well blowout spilled over 210,000,000 gallons of crude oil into the Gulf of Mexico. Under the national emergency response plan, an unprecedented amount — over 2 million gallons — of hazardous chemical dispersants was released into the ocean by the U.S. Coast Guard and BP workers, in an effort to clean and control the spill. Instead, long-term studies conducted after the BP disaster found that dispersants plus oil do more harm than good to people and wildlife.  ALERT has successfully spearheaded public engagement around banning the use of these toxic dispersants, gathering an extensive list of potential plaintiffs and allies across the nation.

The lawsuit, filed in federal court in San Francisco on Jan. 30, 2020, by the University of California-Berkeley Environmental Law Clinic and the Center for Biological Diversity, demands that EPA update the rules governing dispersant use, based on the current science.  ALERT and the other plaintiffs all oppose the EPA’s use of hazardous chemical products such as Corexit in oil spill response.