Every child in the U.S. is born with hundreds of toxic chemicals in their bodies. Industrial pollutants are the leading contributor to chemical illness, now rampant in the United States, and are causing alarming rates of cancer, asthma, skin infections and autoimmune disorders.

Exposure to pollutants and industrial chemicals is preventable - when communities are prepared.

The Alert Project: Our Story

Grand Isle Louisiana, April 20th 2012, Riki Ott, at a memorial for the eleven men who died when the Deep Water Horizon rig blew up on the two year anniversary of the BP oil spill. ©2012 Julie Dermansky

Marine Toxicologist and former commercial fisherwoman Dr.Riki Ott witnessed first-hand the ecological destruction and social chaos from the Exxon Valdez oil spill in Prince William Sound, Alaska in 1989, and became an “accidental activist” in its wake.

Ott was instrumental in supporting the community through the process of establishing the first citizen advisory council in Alaska post-spill to create citizen oversight of oil-chemical activities.

When the BP oil spill released millions of barrels of oil into the Gulf of Mexico in 2010, Ott brought her expertise to the frontline communities in the Gulf, where she spent one year exposing a public health crisis of chemical illness and helping to organize local communities against the threat. For the next ten years and with the help of locals, she continued to document and investigate chemical illnesses - particularly linked to oil- chemical dispersants - among the Gulf inhabitants.

In 2014, Ott founded The ALERT Project in anticipation of 2015 EPA rulemaking on dispersant use.

Read more about our story in a letter from Riki

We focus on some of the most common pollutants in our society – oil and oil-based chemicals – and communities most at-risk from daily exposures or exposures from industrial releases or spills.

By aiming to prevent the debilitating chronic diseases that plague those most at risk, our work contributes to building public awareness and passing stronger laws to protect everyone, everywhere, from toxic oil-chemical exposures.

Trainings - Boots on the Ground

Changing Law from the Ground Up

We build coalitions amongst native tribes, government, workers, fishermen, science and community groups to strengthen oil spill preparation and response policies for better protection of response workers, residents and visitors and we advocate stronger laws and rules to reduce and protect people, wildlife, and the environment from toxic exposures during oil spill response.

We make science and medical research accessible to the people through our public talks, workshops, science-based educational materials, reports and media. We report on the latest oil-chemical explosions and spills to build public awareness of the health risks and ways to reduce those risks, and we debunk industry reports with hard facts and independent science.

Litigation with our Partners

We use litigation as a last resort to force policy change. Sometimes we have to call out government for its dereliction of duties and to ensure that laws are upheld, changed or enforced to reduce and protect people from oil-chemical exposures.

We design science-based programs with people

who have first-hand experience dealing with illnesses from exposures to oil-chemical pollutants, with academic training in health fields, and who live in petrochemical producing regions or ones directly harmed by large oil spills or industrial disasters.

We make science accessible to help adults and youth

understand the connection between environmental health and human health. Our programs train people to recognize symptoms of chemical exposures and communicate with their health provider for proper diagnosis and treatment of chemical illnesses.

We create a peer-led process to engage people

in community-level work to identify solutions and take informed actions to improve their own health and wellbeing. Then, we take our science-based training programs where people need them the most - into at-risk communities around the world.

Before oil and gas infrastructure development or inevitable disasters, we collaborate to strengthen campaigns and public comments to minimize health harm from dirty energy development and to advance clean energy solutions.

During oil spills or chemical plant disasters, we suggest ways that people might best protect themselves, their loved ones, workers, and their communities from exposures to the oil-chemical release and the disaster response, which can create its own suite of environmental and human health problems.

After disasters, we continue to work in and with communities to minimize long-term health harm and advocate science- and evidence-based solutions to better protect the health of workers and families.

Always, we support increased scientific literacy and capacity development to skill up Tribes and communities to organize, defend and make energy choices in their own backyards.

The Environmental Protection Agency’s National Contingency Plan - our nation’s national emergency response plan for oil disasters - is 26 years old, and it relies on outdated science that still supports and encourages the use of toxic spill response products.

With so much missing, inaccurate, or downright dangerous in the official plan(s), we collaborate with our partners to advocate changing attitudes, behaviors and laws to update the national and local plans with current science and evidence-based standards.

If necessary, we litigate

When the government fails to update and enforce laws, we litigate to force the policy changes needed to protect human and environmental health.

Wherever there are oil-gas activities, there are risks of toxic exposures.

Oil-chemical drilling and fracking, manufacturing, and transportation corridors for tar sands via pipelines or railways create high-risk regions across the country — threatening to affect soils, lakes, rivers, oceans and the health of communities that depend on them.

Our Projects Around the World

Between 1989 and 1997, we spearheaded a grassroots movement by forming the Alaska Oil Reform alliance, a coalition of commercial fishermen and environmental groups, and mobilizing thousands to campaign for oil reform, resulting in a series of oil reform laws and the 1990 Oil Pollution Act. Not stopping there, we continued to advocate for tighter oil policy through the community-led activism, such as the 1993 fishermen’s blockade of Valdez Narrows, and the foundation of  Alaska Forum for Environmental Responsibility

In March 2014 we conducted a 25th-year memorial tour of the Exxon Valdez oil spill, organized by communities in Alaska and Vancouver, BC reflecting on improvements and unfinished business as a call to action for citizen advisory councils and more.

We have toured the Gulf states three times since 2010, hosting workshops, raising awareness, and helping communities organize as they continue to be faced with deadly chemical exposure linked to the BP oil spill and subsequent cleanup efforts.

Lack of preparation and response for oil disasters linked to oil-gas activities.

In 2014, we conducted the “Heartland Tour” in Texas, Arkansas, Oklahoma and Kansas, talking about lack of preparation and response for unconventional oil (tar sands, dilbit and frack oil and gas) and learning about people’s resistance and transition efforts in heart of oil country (July, Sept).

In 2011 we visited Michigan communities and people harmed by the 2010 Enbridge tar sands pipeline spill into Battle Creek and the Kalamazoo River, to share our experiences with other oil disasters and gaining experiences from tar sands-diluent (dilbit) exposures.

Enbridge Line 5 under Straits of Mackinaw

In 2014 we published a debriefing report for citizens concerned about fracking and tar sands activities – and confused by the oil industry’s double-speak at a Northern Michigan Pipeline Symposium regarding Enbridge Line 5 under Straits of Mackinaw.

In 2013 we went on the “Lone Star Tour,” organized by Texas Tar Sands Blockaders and others, which resulted in a comprehensive grassroots strategic plan for oil transition and the first Texas town to ban fracking within city limits and a protracted political battle.

In 2013, we went on tour to speak about harm to human health from Exxon tar sands pipeline spill in Mayflower and human rights, and to learn from citizens who triggered scientific study linking fracking waste injections to earthquakes in Oklahoma.

In 2010, we were invited to speak at a three-day potlatch, hosted by Haisla Nation in Kitimat, BC, and “birthed” with founding members into a new Solidarity Clan of First Nations with unceded territory along the proposed Enbridge Northern Gateway tar sands pipeline corridor.

In 2012, we participated in the “Think Tanker Tour” in southern coastal BC, organized by Haida and Haisla First Nations, environmental groups and municipalities, which resulted in change to more progressive leadership during fall elections.

In 1993 our founder and director, Riki Ott, was invited as a keynote speaker at the one-year memorial international symposium on the Aegean Sea oil spill in Coruna, Spain.

Since 1989, we have been fighting for oil policy reform and mobilizing community voices in areas impacted by oil-gas activities across the country.

On the ground at three major oil spills

10 yrs of investigative research in the Gulf

Contributed to Oil Pollution Act of 1990

see our IMPACT timeline over the years

Riki Ott, PhD, is a marine toxicologist and former commercial fisherma’m who experienced the trauma and devastation of the Exxon Valdez oil spill firsthand. This became a vehicle for personal growth and her work in front-line communities to enhance public awareness of the enormous socio-economic costs of our oil dependency.

In 2010, Ott was runner up for Huffington Post’s Game Changer in the Environment award for her volunteer work in Gulf coast communities after the BP disaster. In 2015, she received the Grace Lee Boggs Award from the Make It Safe Coalition for her work empowering people to have a voice in energy choices in their own backyard.

Alliance for the Great Lakes 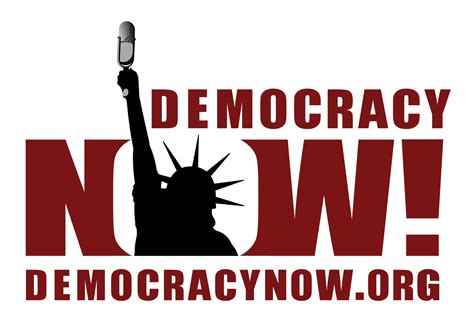 Alert project in the news. 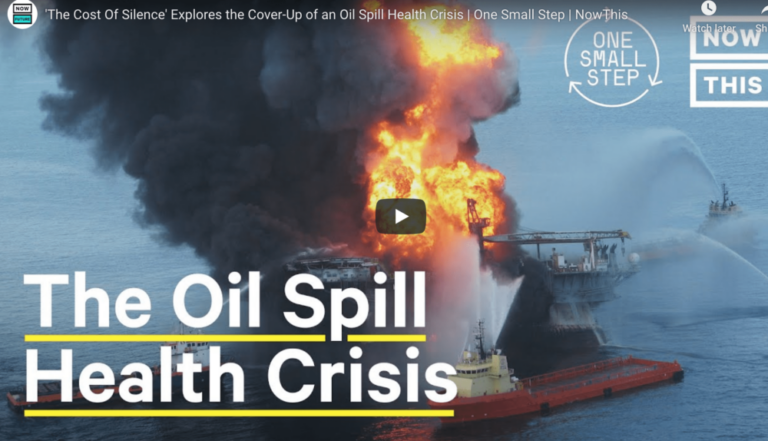 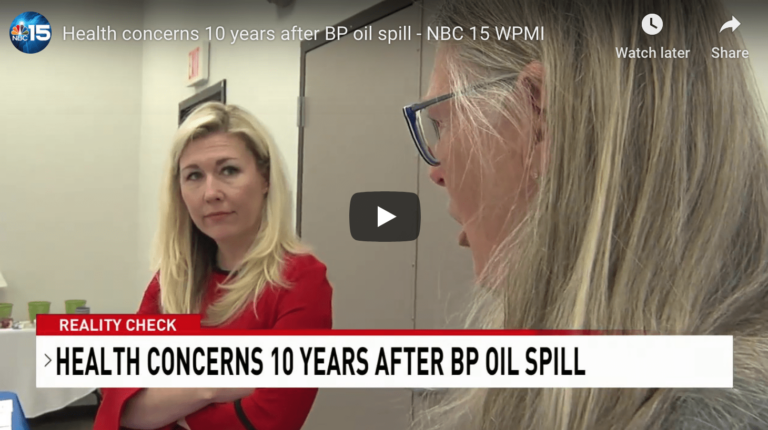