The Alert Project: Our Story

Grand Isle Louisiana, April 20th 2012, Riki Ott, at a memorial for the eleven men who died when the Deep Water Horizon rig blew up on the two year anniversary of the BP oil spill. ©2012 Julie Dermansky

Ott was instrumental in supporting the community through the process of establishing guidelines for dispersant use in Prince William Sound and the first citizen advisory councils in Alaska post-spill to improveoil industry oversight and oil spill preparation and response, both on the grounds and in law.

When the BP oil spill released millions of barrels of oil into the Gulf of Mexico in 2010, Ott brought her expertise to the frontline communities along the Gulf coast, where she spent one year exposing a public health crisis from oil-chemical exposures and helping to organize local communities against the threat. Over the next decade, she returned to these communities and continued to document and investigate chemical illnesses – particularly linked to oil-dispersantexposures – among the Gulf coast residents.

In 2014, Ott founded The ALERT Project in anticipation of the 2015 EPA rulemaking on dispersant use.

Read more about our story in a letter from Riki

From 1989 to the beginning of 2010, Riki was a voice for holding the oil industry and state accountable, and stewarding a replicable model in protecting the human and environmental health of communities and workers in oil spill response and oil-chemical disasters.

Here is an account of how a concerned citizen turned "accidental activist" spearheaded a movement for change.

The day before the Exxon Valdez oil spill, the future Alert Project founder and director Riki Ott presented before the Valdez, Alaska Mayor’s Committee on behalf of United Fishermen of Alaska, repeating a talk given six-weeks earlier at the International Oil Spill Conference in Texas: “It’s not a matter of if, but when an oil disaster happens...”

Contributed to writing and passage of the Oil Pollution Act, including sections on double-hull tankers, involvement of local government and citizen advisory councils in oil spill preparation and response, an Oil Spill Recovery Institute in Prince William Sound and a Presidential Audit of Alaska Pipeline 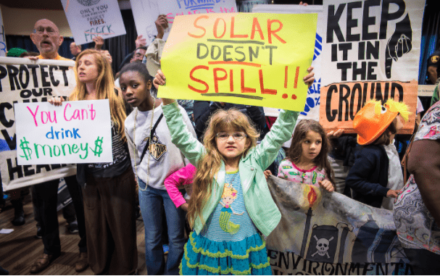 Testified at a series of Alaska legislative hearings on “Ballast Watergate,” triggering state and federal investigations into, and halting the practice of, transferring and running hazardous and toxic oil-contaminated ballast water from west coast states and Hawaii to north-bound tankers for illegal disposal at the Alyeska tanker terminal

Filed complaint and triggered an investigation by the Alaska Ombudsman after the Alaska Dept. of Environmental Conservation released the new oil spill prevention and response regulations to the oil industry prior to their public release and then delayed the public release, based on industry’s objections (In August, the Ombudsman concluded that the state had acted unethically but there was no firm evidence of improper influence by oil industry)

Organized fishermen’s blockade of Valdez Narrows in response to the collapse of major pink salmon and herring fisheries in Prince William Sound, Alaska, resulting in an agreement with U.S. Sec’y of Interior and President Clinton to fund long-term comprehensive ecosystem studies in Prince William Sound to determine if the long-term harm was related to the 1989 oil disaster

Riki was invited as a keynote speaker at the one-year memorial international symposium on the Aegean Sea oil spill in Coruna, Spain