Support the campaign
Learn the Facts

A challenge to the EPA’s dangerously outdated plan for offshore oil spills.

January 30, 2020. Plaintiffs—ALERT Project/ Earth Island Institute, Alaska Community Action on Toxics, Cook Inletkeeper, Center for Biological Diversity, Rosemary Ahtuangaruak, and Kindra Arnesen—filed a lawsuit against the U.S. Environmental Protection Agency and its Administrator in the U.S. District Court for the Northern District of California.  The UC Berkeley Environmental Law Clinic is the lead counsel, and the Center for Biological Diversity is co-counsel in the case.

March 31, 2020. U.S. EPA filed a brief urging the court to dismiss  (i.e., eliminate) our Clean Water Act claim, arguing that “amendments to the NCP are initiated at the discretion of the agency” – meaning at the agency’s whim or pleasure. EPA argued that a “date-certain deadline . . .  is necessary to constitute a nondiscretionary duty.”

April 14, 2020. Plaintiffs opposed the government’s brief, arguing that EPA cannot have unlimited discretion over updates to the NCP (or, as here, a lack of updates) when the Clean Water Act requires “efficient and effective action to minimize harm from oil and hazardous substance discharges . . .” In this case, the Plaintiffs contend that EPA has already determined that amendments to the NCP are advisable and, thus, is now under a nondiscretionary (mandatory) duty to update the Plan in accordance with improvements in scientific and technological knowledge.

April 23, 2020. EPA replied to the Plaintiffs’ response, arguing that because the Plaintiffs have failed to identify a nondiscretionary duty, there is no waiver of sovereign immunity under the Clean Water Act to allow this claim against the agency. However, the EPA concedes: “It is true that, if the Court were to find that Plaintiffs have identified a nondiscretionary duty, EPA’s liability would be clear since there is no dispute that EPA has not yet finalized a rulemaking process to amend the NCP.”

May 6, 2020. U.S. Magistrate Judge William Orrick considered the matter (at a virtual hearing conducted by Zoom) and verbally indicated that he was tentatively inclined to rule for Plaintiffs. The Court will issue its written decision on the matter.

Next step: Motion for Summary Judgement

March 17, 2021.  With our Clean Water Act win in hand, our growing legal team – now supported with four Berkeley Environmental Law Clinic students – will file a Motion for Summary Judgment on our remaining “unreasonable delay” claim under the Administrative Procedures Act. This motion allows parties to expedite resolution of a case where, as here, the outstanding issues are purely legal and there is no factual dispute. We feel confident that Judge Orrick will find in our favor, just as he did when he held that EPA has a firm duty under the Clean Water Act to update our nation’s oil spill emergency response plan based on current science and technology.

April 7, 2020. Meanwhile, the American Petroleum Institute (API) is trying to intervene in the case as a defendant. API’s members are deeply engaged in the exploration for and development of offshore oil and gas resources and operate drilling units, offshore platforms, and pipelines. Offshore drilling is regulated by the U.S. Department of Interior, not the EPA. Interior’s regulation and oversight of offshore drilling does, however, implicate various EPA regulations, including the NCP.

Before conducting drilling activities under an approved exploration or development plan, a lessee must obtain the Interior Department’s approval of an application for a permit to drill. As a condition for operation, every offshore oil drilling unit, offshore platform, and pipeline seaward of the coastline must have a Department-approved “oil spill response plan.” Each oil spill response plan must contain a “dispersant use plan,” which specifies the inventory and location of dispersants and other agents that might be used in the event of a discharge of oil. A dispersant use plan must be consistent with the National Contingency Plan. The operations of API’s members are, therefore, regulated by the contents of the National Contingency Plan.

April 15, 2020. Plaintiffs filed a response opposing API’s motion to intervene. Plaintiffs argued that the fossil fuel industry could not claim a “significantly protectable interest” in this lawsuit (which is one requirement for intervention), where the current dispute is simply over the timing of an NCP update, rather than about the substance of any new NCP regulation that EPA may issue.

---
April 28, 2020. The American Petroleum Institute disputed the Plaintiffs’ timing-only claim, arguing that “API is entitled to intervene to protect its members’ interests in maintaining the status quo.” In other words, API would like to keep the 26-year old Plan that allows expedited and unlimited use of dispersants, a product now known to be toxic to people and wildlife.

Judge Orrick declined to hold a hearing on the intervention issue and will instead issue a written decision based on the parties’ briefs.

June 2, 2020. U.S. Magistrate Judge William Orrick ruled that the Clean Water Act requires the EPA to keep the nation’s oil spill response plans current and effective. New research has linked chemical dispersants, heavily used during the 2010 BP spill response, with long-term illnesses in humans and wildlife. The EPA has failed to consider such “trade-offs” when promoting the benefits of dispersants and instead allows dispersant use based on 26-year-old science. The ruling is a game-changer.

The Court also denied a motion by the fossil fuel industry to intervene in support of the EPA.

These rulings do not resolve our entire lawsuit, however, they do improve our chances of obtaining a timely update to the NCP that takes into account scientific advances and understanding over the last 25 years.

July 22, 2020, EPA filed a motion requesting that Judge Orrick reconsider his reasoned ruling on our Clean Water Act claim. EPA claimed that the Judge did not specifically address various issues it raised in its motion to dismiss our case. However, the Judge's written opinion and the hearing transcripts both show that these issues were in fact amply vetted. This seems to be yet another example of EPA stalling despite the urgent need to update the National Contingency Plan for offshore oil spill response actions in order to better protect first responders, the public and wildlife.

September 1, 2020. The District Court rejected EPA’s motion to reconsider its motion to dismiss the court’s earlier landmark ruling that required EPA to keep the nation’s oil spill response plans current and effective. In the September ruling, the Judge wrote that “EPA’s arguments amount to an improper repetition of the arguments that it made in its motion to dismiss, which I rejected.” In staying the course, EPA can either go to trial or settle the case. Time will tell what path they choose.

April 20, 2021.  ALERT asked the court for summary judgment in our favor on the matter of the EPA’s unreasonable delay over finalizing rules governing dispersant use. We are also asking for injunctive relief – a Court order – to issue a proposed new rule within 90 days of the Court order, with the hope that EPA will base the rule on the most current science, in particular the emerging science showing long-term harm to people and wildlife. Further, we are asking the Court to order the EPA to provide a written status report of progress within 180 days of the Court order; and to issue a final rule within one year of the Court order. The hearing on the motion is scheduled for July 7, 2021.

Latest News From the Lawsuit 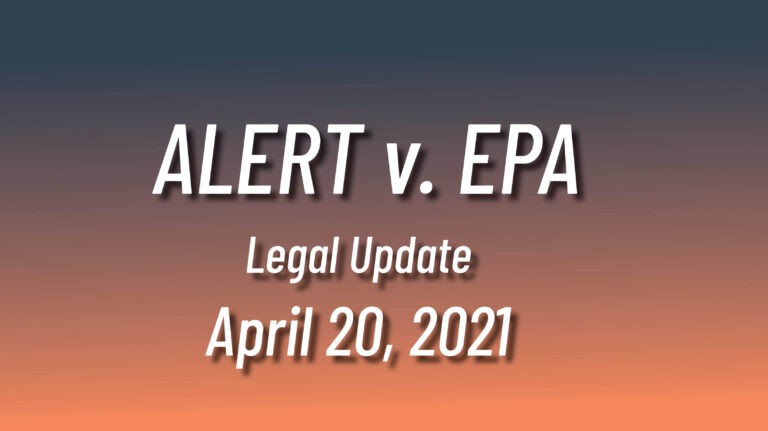 April 20, 2021.  ALERT asked the court for summary judgment in our favor on the matter of the EPA’s unreasonable delay over finalizing rules governing dispersant use.… 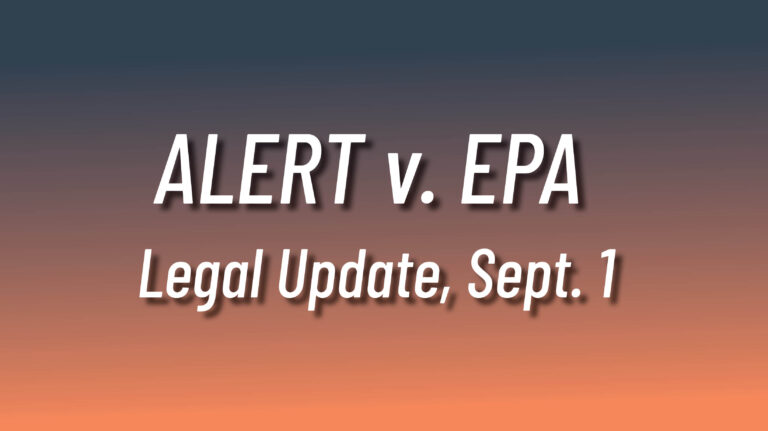 September 1, 2020.  The District Court rejected EPA’s motion to reconsider its motion to dismiss the court’s earlier landmark ruling that required EPA to… 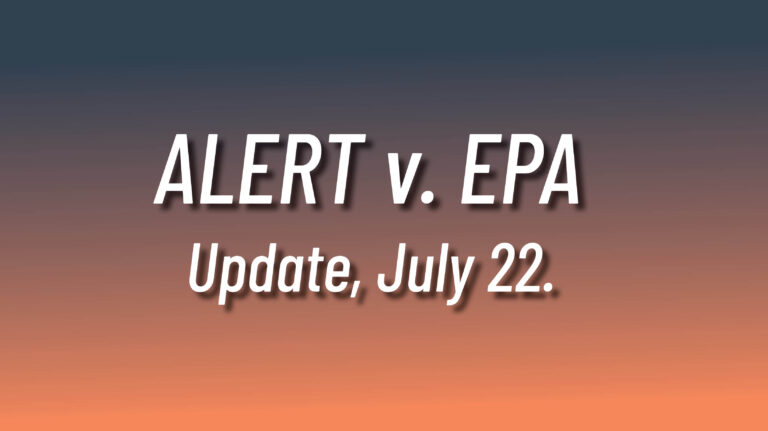 EPA filed a motion requesting that Judge Orrick reconsider his reasoned ruling on our Clean Water Act claim. EPA claimed that the Judge did… 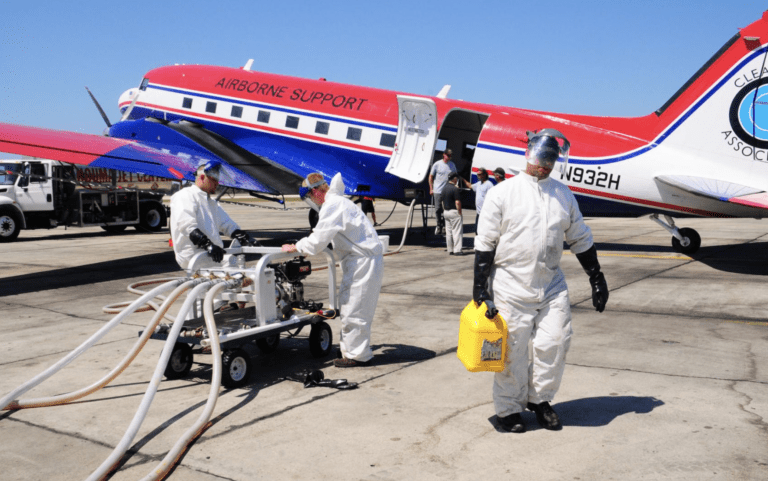 Read the story at Nola.com

According to Inside EPA, “A federal court in California has agreed with environmentalists that EPA has a nondiscretionary duty under the Clean Water Act (CWA)… 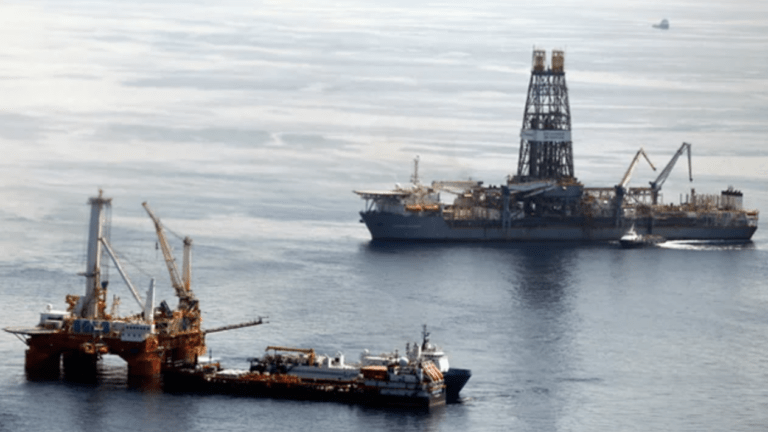 Read the story at TheHill.com