letter from the founder 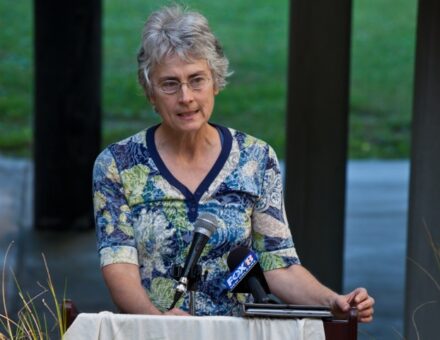 On April 20, 2010, I was still living in Alaska but on tour in the "Lower 48," giving community workshops and university lectures about unfinished business from the 1989 Exxon Valdez oil disaster. Alaska fishermen, myself included, had just lost our epic 20-year court battle against ExxonMobil. Our punitive damage claim amounted to 10 cents on the dollar.

Oil spills are not one-dimensional disasters. Beyond the economic harm, there are deeper social and environmental harms that cannot be fixed with dollars. It’s like trying to put Humpty Dumpty back together again. Communities and ecosystems heal overtime, but they are changed.

I became politically active after the Exxon Valdez disaster. Looking at the news coverage of the drilling rig blowout in the Gulf of Mexico, I realized that someone needed to coach the soon-to-be-massively-impacted people in Gulf Coast communities about what to expect with this disaster and how to mitigate long-term harm to people, communities, and wildlife. It took me a week to realize that ‘someone’ was me.

On May 4, 2010, I arrived in Venice, Louisiana. I intended to stay one month. Instead, I stayed through the first-year memorial, and I returned twice a year in spring and fall, for seven years, to hold community workshops to address people’s evolving needs in spill-impacted states of Louisiana, Alabama, Mississippi, Florida, and Texas. Over time, more and more people in coastal communities struggled to understand and get proper treatment for long-term illnesses and cancers that they suspected to be related to the BP disaster.

More and more people grieved the loss of family members and friends. Over time, scientific studies found that oil and dispersants combined do more harm than good to people and wildlife.

Meanwhile, further inland in communities adjacent to oil refineries and chemical industries, people lived with — and died from — staggering rates of cancer. People asked me: Weren’t these many of the same oil and chemical pollutants that people were exposed to during the BP disaster? Was the daily dose of pollutants causing chronic illnesses and cancers?

Eventually, this work led me to found The ALERT Project in 2014 to bring accessible science and legal tools to those who needed it the most — communities on the frontline of oil and gas activities. And that is how we got here.

Where we go from here depends on you.

The time is now. Are you with us?

Join our campaign to force the EPA to take action.