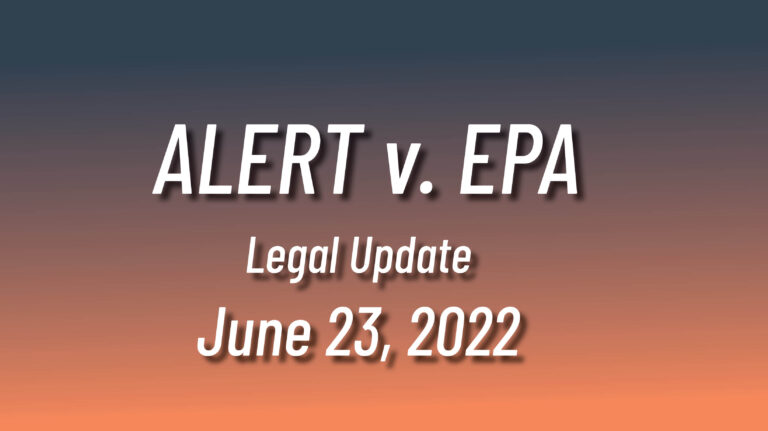 June 23, 2020. An ALERT coalition of individuals, environmental justice, and climate justice groups took action to step up pressure on EPA to ensure that the regulatory process considers the new data and information. The coalition petitioned EPA to supplement its 2015 proposed rule with current science before finalizing the rule in May 2023. The current science calls for a radical rethinking of dispersant use in the deep sea, in the surface, and in coastal waters.

Petitioners listed five demands, starting with reconsidering subsea dispersant use because current measurement-based studies have failed to show that such use mitigates shoreline oiling. Additionally, EPA should reconsider spraying of dispersants on surface waters because current studies have found that such use creates a human health hazard and a potential for widescale harm from the broadcast application. And the agency should reconsider dispersant use in state waters because the known hazards of such use within 3 miles of coasts is irrefutable to people and wildlife, documented by residents, and validated by current science that shows exposure to chemically dispersed oil is more harmful than to oil alone.

The petition also asks EPA to reconsider dispersant use, given the current scientific findings that direct consequences of such use include the unexpected and exceptional sinking of oil to the ocean bottom and suppression of biodegradation of oil instead of aiding it. The National Oil and Hazardous Substances Contingency Plan prohibits use of sinking agents, and only allows products that aid biodegradation. Finally, the petition asks EPA to reconsider dispersant use, based on the current scientific findings of mechanisms of action and disease pathogenesis, from molecular and cellular effects to organ dysfunction and systemic effects that compromise fitness, growth, reproductive potential, and survival — or, in cases of high concentrations, to
multiple organ failure and death — in humans and wildlife from exposure to chemically-dispersed oil.

Our petition concludes that it now seems that dispersants cannot be used safely in any waters of the U.S., or, at a minimum, dispersant use must be banned in certain waters (such as state waters) and drastically restricted in others. Failure by EPA to take current science into account will be a dereliction of its duties under the Clean Water Act.