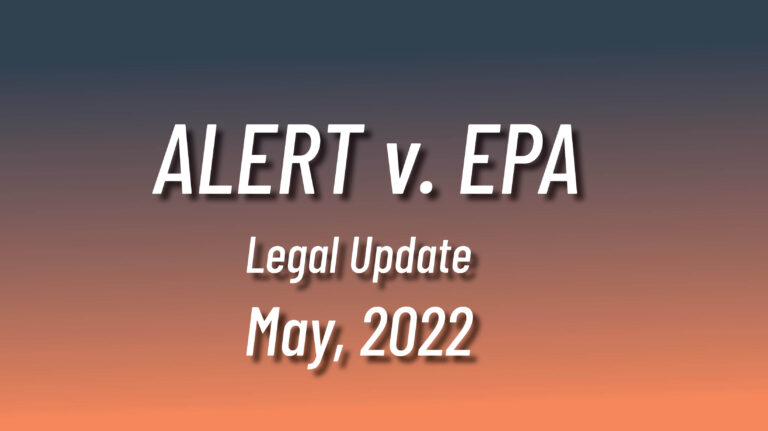 May 16, 2022. Nearly six months after receiving a coalition letter from ALERT, EPA replied, stating that the agency and Dept. of Justice decided not to appeal the federal district court decision and that it “is working through its action development process to ensure a final rule” by the court-ordered deadline of

May 31, 2023. EPA stated that it and its National Response Team partners – sister agencies and the oil industry – already “took action to address health concerns potentially associated with dispersant use raised in recent publications.” Yet the four actions fall short of stated intent for the following reasons. Regarding public health, EPA states that the federal On-Scene Coordinator (OSC) for oil spills in the coastal zone, the US Coast Guard, “has broad authority to address substantial threats to public health or welfare of the United States.” During the BP DWH disaster, the USCG authorized unprecedented use of dispersants by subsurface injection and aerial or surface spraying offshore for nearly three months.

Surface spraying in coastal waters continued well into the fall. This was all experimental. The long-term consequences of this large-scale experiment are now in for public health. For example, one study found that the ambient air concentrations of benzene and fine particulate matter (both human health hazards) in southeastern Louisiana during the peak five months of oil spill response exceeded public health standards and should have been a cause for concern and preventative action.

Another study on women and their children in the same region found an association between BP oil spill exposure and increased incidence of low birth weight and premature born infants, with more pronounced adverse infant health outcomes for black, Hispanic, less educated, unmarried, and younger mothers. 2 Yet these current studies on ambient air quality and public health during the 2010 oil spill response were not referenced in EPA’s reply. Regarding the protection of first responders, “another key priority for the agency,” EPA referenced a 2018 guidance document and a 2021 follow-up guidance that updated the personal protective equipment selection matrix (PPE matrix) for oil spill response workers. But the On-Scene Coordinator is still responsible to decide the best means to comply with OSHA safety and health regulations, so nothing really has changed. Past OSC actions have demonstrably not worked to protect first responders.

The two epidemiology studies on which these guidances are based found long-term respiratory, neurological, and cardiovascular harm from oil spill exposure and that harm increased with oil-dispersant exposure. 1 These studies also noted that there are no OSHA standards for complex mixtures of oil compounds with or without dispersants. Other studies noted that using groups of compounds like volatile organic compounds (VOCs), total hydrocarbons (THCs), or PAHs (polycyclic aromatic hydrocarbons(PAHs), as a proxy for oil spill exposure grossly underestimates exposure risk because traditional analytical methods do not detect all the potentially hazardous oil components. Regarding protecting the environment, EPA cites a recent study by the Government Accountability Office (GAO) for more studies to “examine potential effects of the subsurface use of dispersants on ocean ecosystems.”

The GAO report does not raise or even recommend examining, the fundamental question of whether dispersants can be used safely in any waters of the U.S., or at a minimum, if dispersant use must be banned in certain waters (like state waters) and drastically restricted in others. Current studies provide enough information to make informed decisions about dispersant use now. For example, current measurement-based studies have failed to show that subsurface use mitigates shoreline oiling or enhances biodegradation, which
are two of the key arguments made for any dispersant use. Also, studies found that less than 5% of the liquid oil was trapped at depth as micro-droplets, which makes the overall contribution of dispersant-mediated weathering at depth minor.

In addition, current studies have found that aerial and surface spraying of dispersants creates a human health hazard and a potential for widescale harm from broadcast application. It is time to act – to reconsider dispersant use, including atypical dispersant use – to minimize future harm to people, wildlife, and the environment during oil spills.