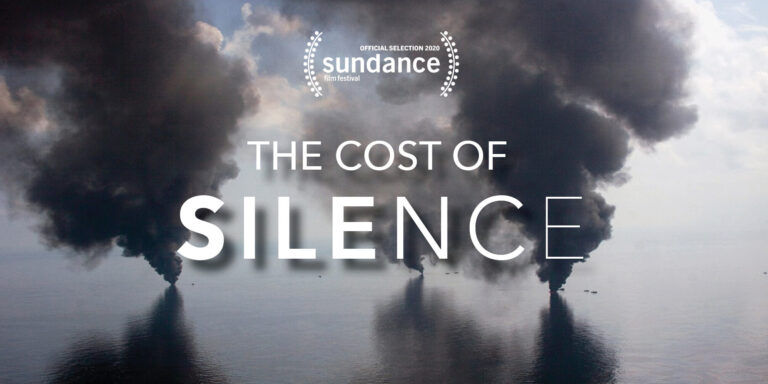 Filmmaker Mark Manning met Riki Ott, a marine toxicologist, in Louisiana in the summer of 2010, when the BP Deepwater Horizon was still gushing oil into the Gulf of Mexico. The disaster would become the largest oil spill in the U.S. at 221 million gallons.
Over the next decade, Riki the scientist-activist and Mark the director continued to cross paths in Gulf Coast communities. Both independently reached the same conclusions, well before scientific studies confirmed the problem: thousands of people appeared to be sickened after exposure to oil and dispersants. The miracle ‘cure’ – dispersants did more harm than good. Both were committed to telling this story so that it wouldn’t happen again.
“The Cost of Silence” exposes the government’s and industry’s use of harmful chemical dispersants in oil spill response and the horrific human illnesses in the decade following the BP oil disaster.
The film has been nearly 10 years in the making — but so has the story of emerging chronic illnesses and rare cancers in the aftermath of the BP disaster response, a response in which the federal government authorized unprecedented amounts of toxic chemical dispersants. Now, it seems, the consequences are also unprecedented.
This free screening is hosted by Half Earth Day Festival on Sunday, October 25, 2020 at 5 PM PDT
Register at www.costofsilencefilm.com

Posted in #WhatsThePlanEPA, Blog, Events and tagged Half Earth Day Festival, Screening 2020, The Cost of Silence