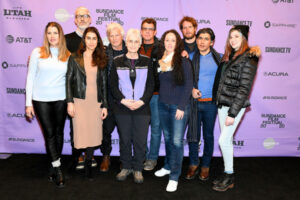 Riki Ott (center) attends the Sundance film festival with the director and cast of “The Cost of Silence.” Photo by Mark Monroe.

“The Cost of Silence,” Mark Manning’s new film documenting widespread and still ongoing human illnesses in the aftermath of the 2010 BP oil spill, and featuring ALERT’s work, premiered as an official selection of the Sundance Film Festival on Jan. 27, 2020 in Park City, Utah.

National Resource Defense Council, in partnership with Entertainment Weekly featured ALERT Director Riki Ott alongside the film’s director in one of nine live panel discussions — during which they shared some of the stories behind the film.

On Jan. 30, 2020 ALERT and its allies filed a lawsuit to force the Environmental Protection Agency (EPA) to finalize its rules on the use of chemical dispersants in oil spill response. ALERT has since launched a campaign to further update the entire plan to protect workers and families from toxic exposures during oil-chemical disasters.

“The Cost of Silence” screened five times during the Sundance festival — once for public viewing in Salt Lake City.  Riki spoke to hundreds of people during interviews and post-film Q&As to raise awareness about these critical issues.

Filmmaker Mark Manning met Riki Ott, a marine toxicologist, in Louisiana in the summer of 2010, when the BP Deepwater Horizon was still gushing oil into the Gulf of Mexico. The disaster would become the largest oil spill in the U.S. at 221 million gallons.

At the time, Riki was working with frontline communities and response workers along the Gulf Coast, drawing from her experience with the 1989 Exxon Valdez spill to coach people on what to expect, regarding human and environmental health effects of oil and hazardous dispersants.

Over the next decade, Riki the scientist-activist and Mark the director continued to cross paths in Gulf Coast communities. Both independently reached the same conclusions, well before scientific studies confirmed the problem:  thousands of people appeared to be sickened after exposure to oil and dispersants. The miracle ‘cure’ – dispersants did more harm than good. Both were committed to telling this story so that it wouldn’t happen again.

“The Cost of Silence” exposes the government’s and industry’s use of harmful chemical dispersants in oil spill response and the horrific human illnesses in the decade following the BP oil disaster.

Ott is one of four main “characters,” all women, who frame this story of human suffering across four coastal states — a tragedy that forever changed lives of BP insiders, response workers and, sadly, families and their children.

“The biggest issue here is human health…that has not been addressed really through the history of oil spills,” said director Mark Manning in a Sundance interview with Indie Wire. “We all care about pelicans we all care about polar bears, but why aren’t we talking about human health?”

The film has been nearly 10 years in the making — but so has the story of emerging chronic illnesses and rare cancers in the aftermath of the BP disaster response, a response in which the federal government authorized unprecedented amounts of toxic chemical dispersants. Now, it seems, the consequences are also unprecedented.

The current President and Administration have proposed to open oceans to virtually unlimited oil and gas activities while rolling back safety procedures on drilling rigs and while relying on outdated policy for emergency response that amplifies harm to the wildlife and people.

It’s a perfect storm, making this the perfect time to focus public attention on strengthening oil spill preparation and response policies – and on preventing more drilling in the first place.

SUPPORT our #WhatsThePlanEPA Campaign and help protect first responders, coastal residents and visitors, and wildlife from all too frequent oil disasters.